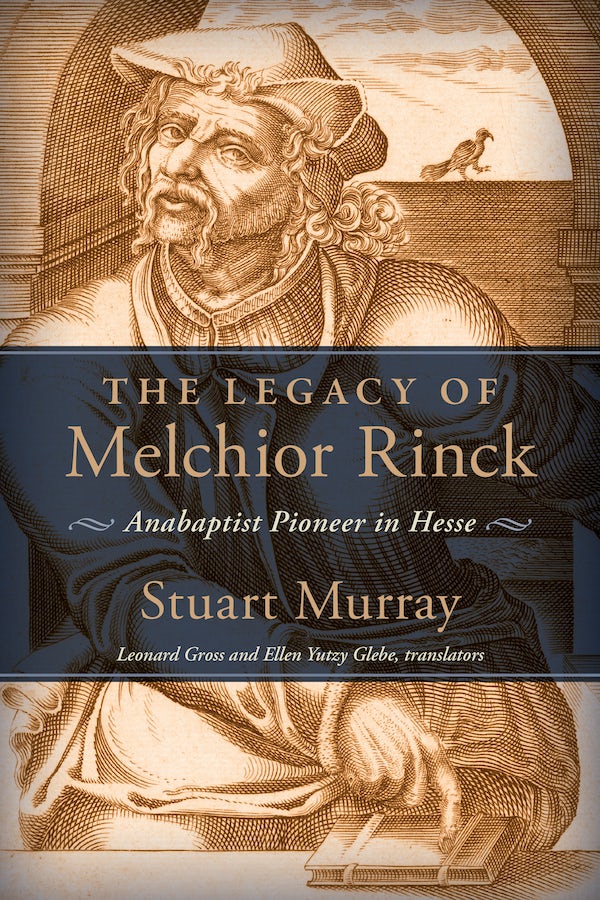 The Legacy of Melchior Rinck

Reformer. Revolutionary. Anabaptist.
​
After witnessing the failure of the peasants’ movement in sixteenth-century Germany, Melchior Rinck was motivated by a passion to see both church and society reformed. His name appears in sixteenth-century lists of significant early Anabaptist leaders, but he has not received much scholarly attention. In this first full-length study of Rinck’s life, relationships, ministry, debates, theological emphases, impact, and legacy, Stuart Murray paints a portrait of an underappreciated Anabaptist pioneer who did not fit neatly into any of the major branches of the movement but developed his own approach. Rinck was vehemently opposed to infant baptism because of the damage this practice did to church and society, more nuanced than many other Anabaptists in his views on church and state, and convinced that love was the supreme divine characteristic and the highest calling of humanity.

The Legacy of Melchior Rinck contains previously untranslated writings and the first complete collection of extant works by and about Rinck, offering readers a comprehensive but readable introduction to Rinck’s pioneering role in the unusually tolerant territory of Hesse and an opportunity to consider his legacy.

Praise for The Legacy of Melchior Rinck

“Despite his significant role in the development of Anabaptism in Hesse, Melchior Rinck has received much less attention than other early Anabaptist leaders. This important book, based on the most recent scholarship, provides the first full biography of this creative theologian and missionary, along with English translations of all Rinck’s extant writings. Stuart Murray’s incisive assessment of Rinck’s contributions—particularly on baptism, civil authority, and the centrality of love in all human relationships—makes this book essential reading for anyone interested in the Anabaptist movement.”
JOHN D. ROTH, project director of Anabaptism at 500

“This book is long overdue and a welcome addition to Anabaptist literature. Stuart Murray has given us a comprehensive and cogent account of the life and teachings of Melchior Rinck, the early Anabaptist leader in Hesse. Known to his contemporaries as ‘the Greek’ because of his learning, Rinck was routinely listed as an Anabaptist founder along with Hans Hut, Balthasar Hubmaier, Hans Denck, and others. Surprisingly, Murray’s excellent study is the first book-length study of Rinck and his teachings. Accompanying the clear historical and theological narrative is a welcome translation of surviving texts documenting the Rinck story.”
C. ARNOLD SNYDER, professor emeritus of history at Conrad Grebel University College, University of Waterloo

“We are indebted to Stuart Murray, Leonard Gross, and Ellen Yutzy Glebe for recovering the sixteenth-century witness and theological legacy of Melchior Rinck. Long overlooked, Rinck now takes his place as an incisive critic of Christendom and an ardent advocate for personal discipleship, social righteousness, and understanding God as love.”
STEVEN M. NOLT, senior scholar at the Young Center for Anabaptist and Pietist Studies at Elizabethtown College

“Anyone interested in early Anabaptist history will love this book. Short enough to read in an evening, Stuart Murray’s biography of Melchior Rinck doesn’t solve the puzzle of Rinck’s absence in Anabaptist historiography, but it does make that absence much less likely in the future. The primary documents at the back are a welcome addition, themselves worth the price of the book.”
DAVID WEAVER-ZERCHER, professor of American religious history at Messiah University

“Stuart Murray agrees with close observers of Anabaptism from the sixteenth century: Melchior Rinck’s influence should not be underestimated. Murray’s thorough biographical and theological analyses, alongside Leonard Gross’s and Ellen Yutzy Glebe’s translations, make a convincing case for the enduring importance of Rinck’s legacy as a wandering evangelist who just may have changed the course of church history.”
JAMIE PITTS, associate professor of Anabaptist Studies at Anabaptist Mennonite Biblical Seminary and director of the Institute of Mennonite Studies

“Though less well known than his contemporaries in Switzerland/South Germany and the Low Countries, Melchior Rinck was an important figure among the Radical Reformers of the early sixteenth century. This fascinating volume, which is written in a refreshingly accessible style, introduces readers to Rinck’s life and thought and provides translations of his extant writings. It is to be recommended to anyone interested in early Anabaptist history.”
MARK L. LOUDEN, Alfred L. Shoemaker, J. William Frey, and Don Yoder Professor of Germanic Linguistics at University of Wisconsin–Madison

“As do other Christian communities, Anabaptists tend to intertwine their movement’s origin stories with the biographies of influential leaders: Conrad Grebel, Michael Sattler, Jacob Amman, Menno Simons. In The Legacy of Melchior Rinck, Stuart Murray introduces us to yet another such movement builder and argues persuasively for his inclusion in the pantheon. Through careful analysis of the first complete English-language translation of extant writings by and about Rinck, Murray persuasively makes the case that this Reformer offered a distinctive theological vision that shaped early Anabaptism in South Germany and, ultimately, beyond.”
DEVIN MANZULLO-THOMAS, assistant professor of American religious history and interdisciplinary studies, director of the Sider Institute for Anabaptist, Pietist, and Wesleyan Studies, and director of archives at Messiah University